Community – in a survival economy 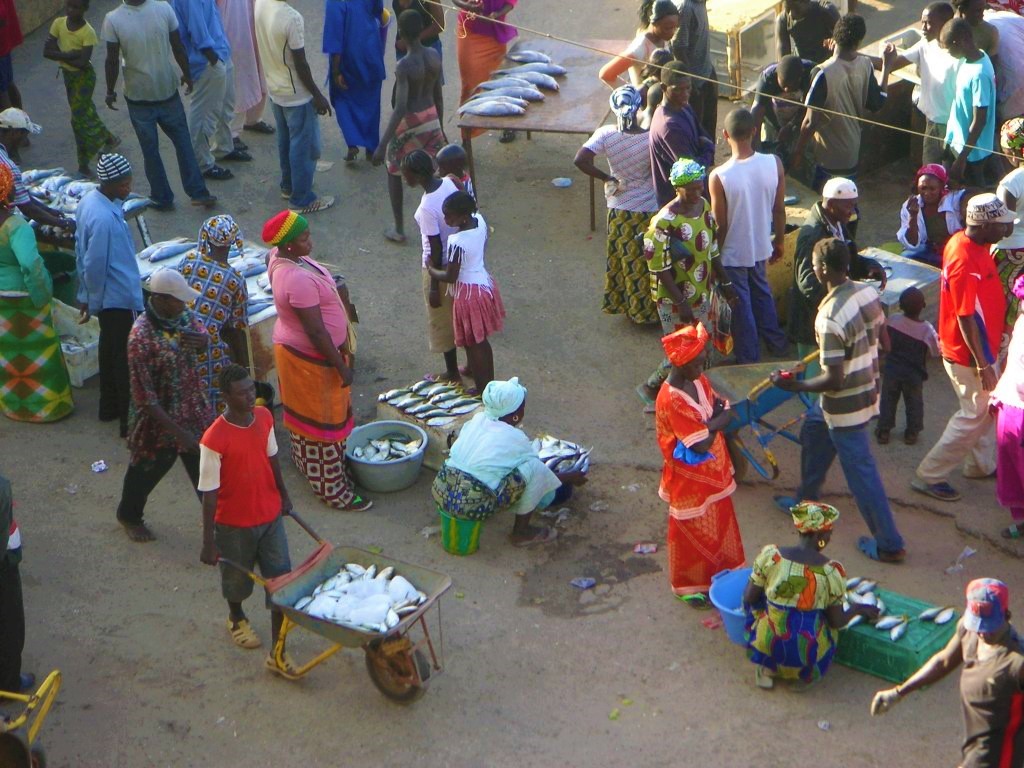 (A of  view of a typical marketplace in an economy where 97% of businesses are micro. This one a fish market at one landing site for fish in The Gambia people sell fish and variety of other products.)

I have argued for many years that what has been touted as ‘Globalization’ was indeed centralization. People in rural areas across the world have been migrating to cities creating essentially city-states, many with overwhelming populations.

Wealth has been accumulating in fewer and fewer hands, and as a result, power has moved further away from people as even democratic countries are becoming controlled by autocratic leaders. These governments usually   espouse smaller government, less tax for those controlling the economy and reductions in service and social support.

In fact, it is even worse than centralization; it is polarization. This is clearly evident in the political and social divides that are stark in many countries once respected and envied for their cohesive democracies. It can be seen in the concentration of transnational corporations into larger and larger agglomerations, most often aided by technology to the detriment of local, regional even national enterprises.

This has had major negative impacts on economies and employment dramatically increasing the gap between the rich and poor. The struggle to gain traction on such a slippery slope is being played out both in reality and in a very influential social media.

The soviet system collapsed thirty years ago along with its most visible sign of repression; the Berlin Wall. The world was aglow with the hope that there would be freedom for all in the world.

Most of the countries who enjoyed freedom and large and prosperous middle-class populations thought that their freedom and pseudo independence would spread, and it did. It spread to some of the poorest and most repressed countries in the world, where protests ensued, dictatorial governments were overturned and struggles for democracy ensued. Some made the transition and others are still struggling.

Surprisingly, in developed democratic countries people relaxed, laid back and became complacent figuring their situation was now stable and their future guaranteed.

Their dilemma is that many had forgotten the struggles that brought them to this place in their development and expected it to continue, while others realized the precariousness of the world situation, and that their prosperity and freedom were slipping away.

The wealthy and most powerful saw this as the chance to tighten their grip on all the wealth and power with few to oppose them. The wealthy and powerful are well versed in pitting people against each other and creating real and imaginary divisions. This is how they accumulated their wealth and garnered their power in the first place.

Since then the middle class, battered by its own economic decline, is shrinking, divided and because of growing income disparity, demoralized. Suddenly, for them, the game has completely changed.

We have arrived, as a result, at another pivotal point in human evolution, whereby the poorest and most oppressed are aggressively fighting for freedom, while those, supposedly free with democratic countries are caught up in a struggle to sustain their hard-earned freedom and whatever level of social equality they have enjoyed.

It didn’t change in a moment; it has been perpetrated over three or more decades by nefarious means, unscrupulous businessmen and easily bought politicians. Wealth and power were slowly siphoned off under the guise of “globalization” with the promise of wealth for all. Its a myth being exposed for what it really is – a wealth and power grab by the greedy

In an article, “People without Boundaries” written in 1992, I naively wrote: “Globalization and the global community are words used to address a phenomenon causing the breakdown of geographical boundaries among the nation states of the world……  The philosophical, structural and geographic boundary changes of the evolving global community make us unsure of who we are and where we fit.”

Little did I, or for that matter many, realize the ultimate destruction that was being wreaked  upon the institutional, structural and value base that had been built up over the years after two world wars and the great depression. This period genuinely brought much opportunity, prosperity and security for so many.

In another article, “Building the Foundation of Community” written in 2009, I wrote about my realization at the time that was reflected in this comment.

“It appears that people are expendable, not only at work but in life, a commodity to be bartered, bought and sold at will, and disposed of, when any sense of usefulness is waning.” That sentiment was also in my thoughts on Community, once thought to be the essence of place and belonging for people, but now being shredded and discarded like so much wasteland.

We are creating a world where the only people who have place and belonging are the rich and powerful; everyone else is a waste of time and resources. The very basic fabric of a society that has been built since in the latter half of the twentieth century is being ripped asunder to satisfy the greed of so few people, with no regard for the rest of humanity or the physical world in which we live.

This is having a major impact, not only on developed countries, it is affecting people globally. It is globalization gone wrong, a wanton destruction of human society and life. It has had major impacts on government, economy, social and physical constructs and even the religious beliefs that once were the foundation upon which people built their communities and lives.

In the case of government, many have been enticed to elect and empower those who promise greater wealth, then immediately upon election cut taxes and regulations for the wealthy then shift the burden to the middle class. Under the guise of saving money, they introduce austerity programs which usually mean  cutbacks in education and social services, and less for the poor and destitute. Much of these saving are funnelled up to the rich and the politicians who increase their salaries and benefits at will.

The world economy has been changed dramatically, to some degree by technology, but to a greater extent by the consolidation of large business corporations into fewer and fewer hands. What were once somewhat balanced economies with a mixture of small, medium and large enterprises are now predominantly accommodating the branch operations of mega-corporations, with various percentages of micro-enterprises and a sprinkling of small and medium businesses in the mix.

Predominantly in most countries, local enterprises fall into the category of micro which make up over 90% of businesses in developing or poor economies and 50- 60 % and even higher in developed economies that would also have a few larger businesses. There is the presence of global corporations in all countries, if only via the internet.

This growth of small business enterprises has been celebrated in most developed economies as demonstration of economic renewal with entrepreneurship  spreading itself wide and far and proof that a new era was emerging where small business would prevail. The opposite is true, as so-called global corporations now control most economies and nearly all the wealth and are not global in ownership but owned and controlled by the few.

The reality for micro-businesses, now predominantly the majority of all local businesses, is that they have limited funds and no access to capital for expansion. They employ few people, and most are in survival mode as the only sources of livelihood for those who operate them. They exist because people have no other means to pay for food and shelter and do what ever it takes.

Entrepreneurship is mostly a myth. What we have now are poor people using whatever means and intelligence they possess to eke out some kind of living. This is mostly the same in developed countries and developing countries alike, as the former cut back on their social programs and more and more people fall into poverty. The only difference between being in poverty in a developed country and a developing one is that you need more money to exist in the former.

People and their communities, especially those in rural and marginalized areas, including within cities, face the prospect of living in an economy where survival is the only option. Once again people will have to live by their wits, not easy in a society and economy where money reigns supreme.

The myths being proffered, entrepreneurship and small business (mostly micro) that will supposedly replace the current economy for ordinary people is a stretch of the imagination, at best, especially if government and financial policies and programs remain skewed to benefit mega-enterprises. The belief that social enterprise will replace social welfare and support for the poor and disadvantaged is an even greater fantasy.

The social constructs developed after the Great Depression and World War II, which brought many countries to the greatest level of prosperity and social equality in the history of humanity are gradually and systematically being destroyed and discarded.

Even the beliefs of most religions have taken a beating as on one hand you have terrorism and discord being sown to disrupt social and economic progress, while on the other you have a focus on wealth by a new and growing religious zealotry, replacing faith in any kind of loving deity. Many of these religious leaders have huge churches, airplanes and multiple mansions paid for by people seeking some solace for their souls and safe passage into the next life.

So, with every aspect of society seemly collapsing around us, we face the prospect of entering a brave new world with little by way of foundations, few commonly held beliefs, divided populations and evil people in control.

Many years ago, I made a presentation at a technology conference about myths and their reason for being that of putting the universe, the world and life in a context that made life livable. I suggested that  as humans destroyed the myths that had been built over centuries, there would be nothing left; only reality.

Humans have never been comfortable living in reality because it is a concept so elusive and so enormous that is far and above anything the mind can understand. That is why throughout history myths have been created to give people a belief they could hold in their minds and provide comfort while living in the unknown.

The world now faces a new reality, and as in the past, people will have to come together to take back the power and wealth which has been stolen from them. We all equally share this world, whether we believe it or not.

The myth that has been created that some are more equal than others is the last which has to be broken, if we are ever going to create a more balanced world where each and every person has the opportunity to share in its abundance and ensure that even those most disadvantaged  are provided for in this life. Its not an impossible dream, as many have had the opportunity to taste its benefits, before greed took over.