Love and care are not enough 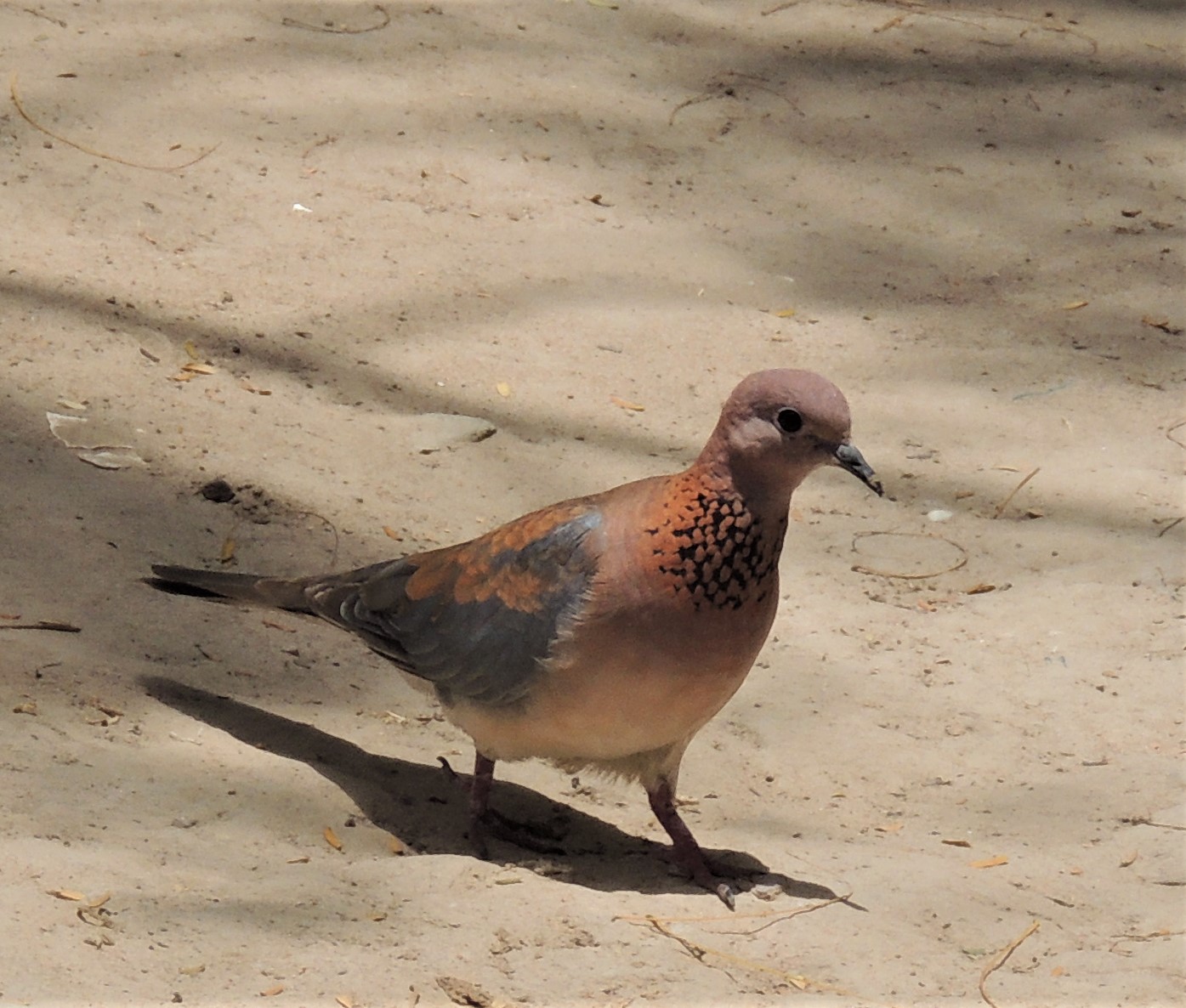 Unfortunately, the story of my little bird did not end as we had wished and hoped. On Monday April 27th while I was in the house tending to Nyima the bird disappeared, I had only been away for a short time. All day we had our eyes on it to see that it did not stray from the secure area with tree covering to the back of the house which is more open.

We searched the whole property, but the bird was nowhere to be found. It was obviously taken by one of the large crows or vultures that are always around. It had not flown for two days, even when prompted by the mother.

The parent birds have been searching everyday even over a week later. One of my concerns since we found the little bird was the predator birds that often frequent this area. I had asked around if anyone had a bird cage, but such things are scarce here, not that I liked a cage, but I knew it would provide some protection. A small bird such as this is easy prey for the keen eyes and sharp talons of these much larger birds.

Saddened as I was, I realized there was a lesson in this experience of caring for this small bird for all those with responsibility for vulnerable creatures and humans. It is certainly something for everyone to ponder in this time of so much tragedy and death in the world. It is obvious that love and care, in and by themselves, are not enough and there is a third element necessary to ensure the future of any living thing; it is security, as important, if not more so.

Security is on the minds of most, as humanity is being ravaged by an invisible virus and people are dying en masse. On one hand we have the care givers providing love and care untiringly to those ill and afflicted and the good Samaritans helping those in need in society everywhere. On the other hand, we have the charlatans and swindlers conspiring to capitalize on this tragedy to benefit themselves.

It appears that every species of living creature has perhaps a strain of predators and vultures to prey on the weak and feeble. It is a part of life, and why throughout history there have been so many disasters and mass killings. Fortunately, the good always appear to have outnumbered the bad.

As we meander through this pandemic, perhaps we should all consider the kind of community, society, and government that we would like to have in a new world. If anyone thinks that coming out of this transition the world in which we live is going to be the same as when it started, then they are living in a dreamland – the way we will be living will be dramatically altered.

The love and care that is evidently unfolding around us will not be enough to secure our future well-being. There is the whole concept of shared security that will need to be considered. The kind, extent and restrictive nature of the security that will be needed to secure the future of our children, grandchildren, and the babies, not yet born will need to be contemplated.

In the case of people, oppressive societies, even within walls, have not been conducive to human well-being and progress. We are learning during this pandemic that a society which provides little protection for its people is not the best means to keep people healthy and secure.

People need space to express and fulfill themselves, but they need a means to protect themselves from nastiness that can appear or be created by those so inclined. They need to better understand the consequences of their actions and inactions for others, as well. These are all being exposed before our eyes as this pandemic continues to unfold.

Inaction in the beginning by most governments has been the cause of many unnecessary deaths. Misguided actions now being taken to open-up communities and economies will contribute to many more. Perhaps as it is contained, people will realize the resulting transition that will be necessary for humanity and the living world in its wake. It may be worth our while to look into our history for ideas and lessons.

We do not necessarily have to go back far to find some answers and concepts. The period after the second world war, which really was the end of an era that began with the first world war, followed by the Spanish Pandemic and a worldwide depression – a 50-year period of human and societal devastation and destruction.

It led to a social and economic transformation that provided one of the greatest periods of human progress, technological wonder, and prosperity in human history. Sadly, it was not for all, much of the world was left behind for many reasons, including the misunderstandings and mistakes made by those who created it and leaders who only wanted more power and control.

The architects of this transition after the war were perhaps much too tired and empty to fight any further, and maybe they too, compromised too early. Most likely, they misjudged the dangers in a more open society, wherein there were predators and vultures just waiting to attack those most weak for their own benefit and self-satisfaction.

They tried their best to build a secure foundation of more global institutions and governmental bodies to oversee and manage this new society, despite the opposition and push back from countries who were not so inclined to take this approach. But in retrospect, these institutions should have been built a little stronger and more fluid so they could evolve and change as necessary with time.

Maybe the human predators and vultures could have at least been stymied in taking control for a few more years until more of the world could have benefitted and felt the difference in their lives.

But as history shows, these twisted individuals and groups, like birds of prey are relentless, just waiting to spot a weakness to take advantage. They gradually and collectively infiltrated most all these new institutions and governments and natural decline set in. As we have witnessed over the past few decades even many of the most progressive societies, democratic governments and international and national institutions fell prey to their mantras, falsehoods, and misdeeds.

Governments, economies, and institutions of all sorts were corrupted leaving many people unsure, uncertain, and baffled at how this could be restrained as the impact of greed, malice and imbalance replaced a sense of fairness, care, and balance.

At the same time, the basic spiritual nature of humanity was being twisted by greed and ego to worship economy and money more than people, community, and a natural sense of a “loving god”. Instead, people were pushed to get what they could while there was anything left, forgotten was the need for any sense of the future, limits, or necessity; only the now was important.

Even religions were impacted by scandal and visible opulence as some saw opportunity to make money, others convinced people to join them in war to gain power and financial rewards. Most were selling a fantasy that tapped into the historical beliefs of religious domination as the pathway to heaven.

This pandemic has been a catalyst to expose these fantasies for what they really are, as control quickly fell from human hands and minds into the unknown and their feelings. This is a place humanity has been before, and it is where people have never been comfortable. The mind can understand that which is tangible and obvious, but is uneasy with those more mysterious, invisible, and non-evident feelings that often engulf us.

There have been many such turning points throughout history and each time a new story has emerged, as old myths were proven wanting and theories and beliefs were destroyed.  There are many people, in this early stage of virus destruction, postulating a way forward, mostly based on what was, not necessarily what could be.

There are many others vying for power to control not only the narrative, but its implementation. There are others who are promoting a more caring considerate and balanced society where everyone has a chance in life to fulfill their aspirations. Sadly, there are others who, as we have seen over the past couple of decades, are willing to follow those whose goal is to capture total power over as much of humanity as they can.

So, the question that needs answering is from where will the leadership evolve. Who will be able to capture the imaginations of the majority and how will all this come about as the foundations laid over a lifetime crumble and fall? They have been crumbling for a few decades now and the pandemic, coupled with climate changes, brings home to roost the many mistakes and deliberate actions of the few, in an effort, to control all the wealth of the world.

“The world, perhaps as never before is in need of spiritual rejuvenation and a foundation for living based on the human values of caring and sharing.  If the next cycle of economic change were built on this foundational philosophy with economic and social constructs to support it, then it would be a transformation of spiritual proportions.

If there is enough will remaining, desire evident and hope available to overcome the cynicism and despair currently engulfing developed societies, then a truly “humane” society can emerge to lead us through our next cycle of change.

This “human” philosophy will bring sanity to a world lost, and it will embolden the next generation to embrace a more spiritual approach to life and living where caring is important and sharing essential.   This is the real transformation that humans have been seeking since the dawn of human life.” (William – Life’s transformation – 2008)

Perhaps we should look to the leadership of the countries who most quickly arrested the progress of this virus and caused the least impact to their countries and people and compare them to our own. This might give us some insight into the direction and leadership that must be looked at if humanity is ever going to get through this mess and build a society more caring, loving and supportive of everyone than exists no matter their country. We should also look at their policies, ideas, and concepts of governance for the inspiration for a new world that will be a necessity after the ravages of this plague subside.

“The world now faces a new reality, and as in the past, people will have to come together to take back the power and wealth which has been stolen from them. We all equally share this world, whether we believe it or not.

The myth that has been created that some are more equal than others is the last that has to be broken, if we are ever going to create a more balanced world where each and every individual has the opportunity to share in its abundance and ensure that even those most disadvantaged  are provided for in this life. It is not an impossible dream, as many have had the opportunity to taste its benefits before greed took over. (William _ Community in a survival economy – 2019)