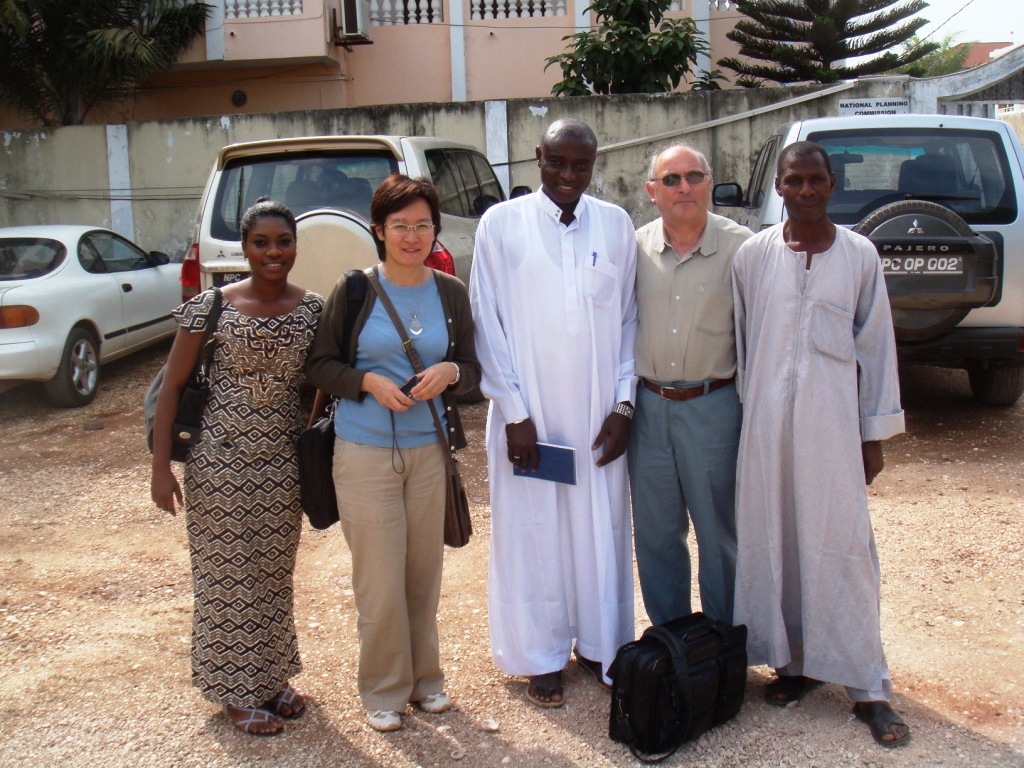 (This picture was taken with my working colleagues shortly after I arrived in The Gambia.  We were touring one of the local markets that was much in need of redevelopment.)

I have taken up an assignment in The Gambia in Africa where I will be providing support to the Ministry of Economic Planning and Industrial Development with a focus on a National Development Plan.  The implementation of this plan intends to have much focus on the regions and communities.

Gambia is a small country, yet one of the most densely populated in the whole of Africa with its population of approximately one and one half million souls.  It is apparent that this country, like most in Africa, has many challenges.  But, people are warm, friendly and welcoming.

I realize that each new move, and for me there have been a few, is somewhat like a rebirth, whereby one has to learn all the basics of life once again. You progress from unknowing through learning to enable you to stand on your own feet.   After two weeks I have found a place to live, know where my office will be and have had some superficial glimpse of the people who inhabit this country.

While the extent of my activities is still developing, I was asked to respond to a “community plan” developed by one local community.  Herein lies part of my response which may be of interest to others.

“The reading of this document provided a realization that this was perhaps more a philosophical statement about the communities past and present than an in-depth look at its future.  It did, of course, lay out some ideas and concepts for future development, but one is not sure how rooted in the community these are.

The philosophical basis for this document is difficult to dispute as it offers a reflection on the beliefs and values of community, which are very dear to many people, especially older generations.  It does offer the basis of values that are important to communities anywhere in the world, not only in The Gambia.

The dilemma, as always, is how the learning of past generations and the values, which were important, get passed on to younger generations, who obviously see the world from a much different perspective.  There has to be a basic recognition that each generation enters a different world, one where the parameters, issues and challenges, while somewhat similar, are in essence different from before.

In our world people also have to deal with technological advances undreamt of even fifty years ago.  Thus, while it is important to preserve the memories of times now past and the subsequent learning of another generation, it is imperative to inculcate the most human of values in younger people that are timeless.

Therein lies the real challenge of each generation, as it fades and a new one takes ownership of society.  The question is always the same.  How to preserve, translate and pass on these fundamental human values to meet the needs and desires of this new generation of fresh young minds?  More importantly, how to instill these values in their hearts?

It is obvious not only in Sukuta, but in The Gambia and the entire world that this younger generation faces different challenges, different learning and different needs than can be truly comprehended. It is an impossible dream for each of us individually or even collectively as communities to move back in time.

The most that the fading generations can do for those who are younger is to share their learning, their wisdom and their care in providing awareness, education and support as they face their own lives, their own challenges and their own experiences.

It is obvious today in the world that the older generation, in many cases, has not instilled in the hearts of those younger the values fundamental to human existence and progress.  Perhaps many (when they were younger) believed it unnecessary, and like all youth, they too thought these outdated.  As a result, this newer generation, like most others before, will have to learn these values in their own way.

A philosophy, much less a plan only has value if it is felt in the hearts of the people who believe and as a result of that belief wish to encompass it in their lives and the lives of those whom they love.”